Light bulbs could be the new way of delivering data.

In 2011 the term Light Fidelity was coined by Professor Harold Haas during a TED Talk at the University of Edinburgh. His talk has amassed over two million views and I encourage you to watch it. In the talk he shows a LED lamp streaming video.

The idea stemmed from Professor Harold Haas considering the use of light bulbs a wireless routers. Li-fi now has developed to the point where it can be used for wireless communications using common household LEDs, through the form of Visible Light Communication systems.

Estonian start-up Velminni, in Tallinn has tested the use of li-fi. Velmenni used a li-fi enabled light bulb to transmit data at speeds of 1Gbps, laboratory tests have shown theoretical speeds of up to 224Gbps.

The tests were done in an office to allow workers internet access and also in an industrial space where li-fi could provide a smart lighting solution. 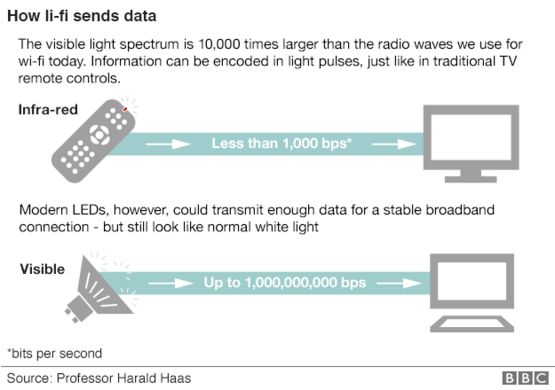 According to the International Business Times, chief executive Deepak Solanki has estimated that the technology would reach consumers  “within three to four years”.

Li-fi cannot interfere with radio signals, it can be utilised on aircraft and in other places where interference is an issue.

Li-fi can deliver internet access 100 times faster than traditional wi-fi, offering speeds of up to 1Gbps (gigabit per second).

It requires a light source, such as a standard LED bulb, an internet connection and a photo detector.

The technology can not be used outdoors due to the facts that direct sunlight can interfere with the signal.

The technology  cannot travel through walls so its initial use is likely to be limited to places where it can be used to supplement wi-fi networks, such as in congested urban areas or places where wi-fi is limited, such as hospitals.